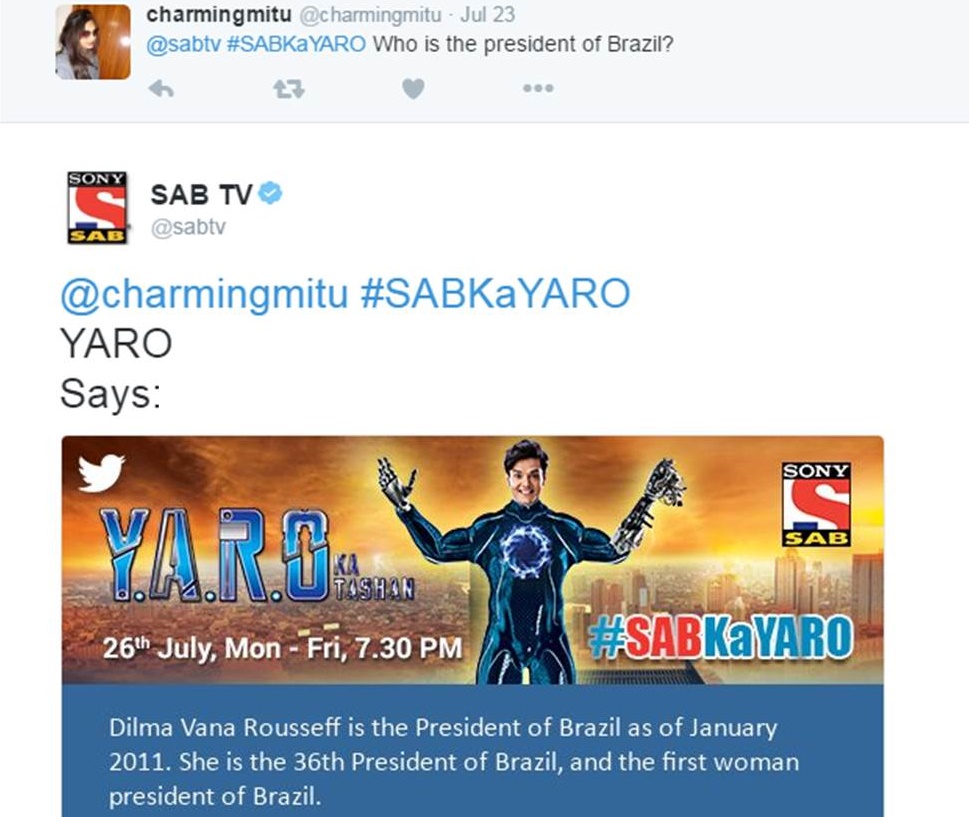 SAB TV in partnership with Twitter, has launched a very innovative and one of its kind social initiative on Twitter, for its new show ‘Y.A.R.O Ka Tashan’.

This is yet another first in the entertainment industry in India, SAB in collaboration with Twitter has created a unique Twitter BOT representing the Humanoid – Y.A.R.O, a lead character in its new show. The BOT replicates the characteristics of Y.A.R.O by answering all kind of questions thrown at it. The show centres on the protagonist Y.A.R.O, a humanoid, focuses on the relationship with friends and family, importance of love and humanity. In line with the new age concept of the show, the channel has also implemented this idea for its online and on ground marketing promotions.

This unique initiative is such that anyone on Twitter can tweet any question on their mind with hashtag #SABKaYaro and they will get a response to the question in just a second. One can ask any generic question they like and they will get a response from Y.A.R.O through the SAB almost instantly. The netizens can experience the brilliance of the technology and intelligence that Y.A.R.O embodies. Try it to believe it!

Mr. Anooj Kapoor, Senior EVP and Business Head, SAB TV states,
“The partnership with Twitter is intended to provide our potential viewers a holistic experience of extraordinary powers of Y.A.R.O. The initiative makes it convenient for people to access Twitter and comprehend the intelligence of Y.A.R.O”

With a show so fresh and promotion so novel, Y.A.R.O Ka Tashan sure promises to be a package full of entertainment!
Are you excited for the show?!?