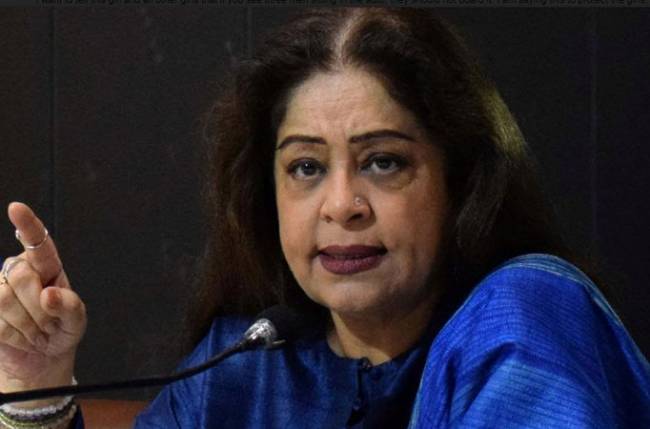 Chandigarh’s BJP MP Kirron Kher has stirred a controversy by giving unsolicited advice to a young woman who was gang raped earlier this month in Chandigarh by an auto-rickshaw driver and his two accomplices.

Kher said on Wednesday that the victim should have been more cautious and not boarded the auto-rickshaw in which three men were already sitting.

The Bollywood actress and Lok Sabha member on Thursday sought to clarify her statement, saying it was “only in the context of certain precautions” that women should take and that it was “not intended to blame the victim or shaming her”.

The Bharatiya Janata Party MP had earlier said that the 21-year-old gang rape victim should have avoided boarding the auto-rickshaw when she saw that three men were already sitting in it.

“I want to tell this girl and all other girls that if you see three men sitting in the auto, they should not board it. I am saying this to protect the girls.

“We all have to be alert about such things. I am saddened by what has happened with the woman,” Kher told media on Wednesday.

On Thursday, Kher clarified her stand.

“I just said that the world is a bad place. We all, especially ladies, have to take precautions. As a mother, I am saying this that we need to take care,” Kher said.

She said that if the victim had called up the police control room, the police would have taken her and dropped her safely to her home.

“If the Congress wants to make an issue out of it, I cannot help,” she said.

The victim was allegedly gang raped by three men on November 17 evening after she hired the shared auto-rickshaw to go back to her paying guest accommodation in Mohali town, adjoining Chandigarh.

The police got the CCTV footage of the auto-rickshaw and its driver from a gas station in Sector 42 where the vehicle had stopped to get a CNG refuel.

The Union Territory police arrested the three men after over a week after the incident.

The victim, who hails from Dehradun in Uttarakhand, had boarded the shared auto-rickshaw after attending her stenography class in Sector 37 here.

The victim told the police that the driver took the vehicle to the gas station for refuelling and then turned towards Sector 52.

He stopped the auto near a wild growth along the road and said that it had broken down. When the woman got out of the vehicle to take another one, the three men pulled her into nearby bushes and took turns to rape her.

Irfan had tried to commit suicide in police custody this week by stabbing himself with a glass that he broke in the prison cell.